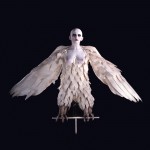 During his evening walk Mister Oscar witnesses an assault. He is very surprised to see that it is the work of a genuine harpy. He wants to find out more, which is not without danger.

“Harpya was my first attempt to combine live action images with animation. The live actors had to be incorporated in graphical backgrounds, for which I had to invent my own technique at the time. The result was rather satisfying, but very time consuming, because it really was limited to a one person’s job. I guess Harpya will remain the only film ever made in this technique.”

1980: Chosen by international critics as one of the 20 best short animation films ever.

2006: Raoul Servais Harpya is elected by 30 international experts as number 14 of the 100 most renown short films in One Century of Animated Film.

– Produced by: Anagram, realized with the support of the Flemish Community