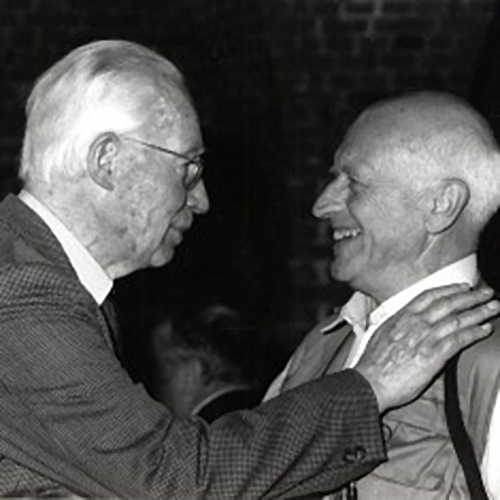 Raoul Servais and Henri Storck, at the left, film pioneer and also born in Ostend.

Because Raoul Servais himself did not receive any film training and as an autodidact spent long years on unraveling the secrets of animation film, he wanted to be animation film education available for the new generations.
In the early sixties, Servais founded the first official aninmation school of the European continent at het Royal Academy of Fine Arts (KASK) in Ghent.
For eight years he also lectured at the École nationale supérieure des arts visuels de La Cambre (ENSAV) in Brussels. Two years long he was in charge of the animation film training at the Centre Tertiaire de Formation in Valenciennes (France).
Servais was invited as guest teacher at the film faculty of Columbia College of Art in Chicago and at Calarts (California Institute of the Arts) – Los Angeles.
In order to raise interest for animation film already at a very young age, he set up – with the support of Jacques Dubrulle and the input of Christel Degros’ and Isabelle Cracco’s educational skills – the workshop Waf! within the association Fund Raoul Servais.

with special thanks to Philippe Moins