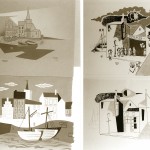 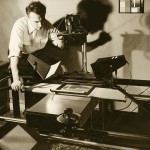 1960 will be a decisive year in Servais’ career. After multiple trades, he is appointed teacher of decorative arts at the Ghent Academy of Fine Arts. Servais will now be available for the big plan: making an animation film, which he had been working on since 1957.

In one of his drawers, the obstinate Ostender holds a script that he is dying to turn into a film: “The False Note”. But he soon realises that the present level of his knowledge and the technical capacities at his disposal are far too limited for such an ambitious project, especially as it would require the application of something that he has not yet mastered at all: sound. Servais must have found it difficult to renounce to his script – temporarily – but the idea does not abandon him and in spite of everything, he finds pleasure in the adaptation of an ancient Flemish song : “Het loze vissertje” (The Cunning Little Fisherman). This subject is interesting in the existence of a “finished soundtrack”, which will serve as a pattern for the production of “Havenlichten” (Harbour Lights). Recorded at the Ostend Conservatory, the musical part is re-recorded on perfo tape. But Servais has no editing table. No harm done: Servais hires a 16mm projector and starts identifying each note on the film, repeating the operation just as often as is required. He then transfers the results of his ‘detection’ on paper, thus reinventing the “exposure sheet” (the basis of the American cartoon, probably developed at the end of the twenties by Disney for his “Silly Symphonies”). “This film has been my real school”. It will take Servais three years to finish “Harbour Lights”, calling on his friend Jean Decock, a sound maniac, as well as on friends, pupils, his wife, while he does all the animation and the backgrounds.

The film tells about the misadventures of a little clumsy lantern, laughing stock of the ‘real’, large lanterns, and how it wins everybody’s respect by coming to the rescue of a defect lighthouse. Servais reveals a natural awareness of what animation can do that live action image cannot, the heroes of the film being a lantern, a lighthouse and above all… the light, used as a narrative and dramatic element.

With “Harbour Lights” he opens a lineage of metaphorical films, all of which give away they have been long thought over, a hundred times begun all over again before taking final shape. To bring his ideas to life he deliberately turns to the plastic arts. Result: references to contemporary art are abundant throughout the entire film (Mirò, Tanguy, Klee and Léger have all passed in review).

The film was finished in time for the Antwerp National Film Festival. To Servais’ own amazement, he receives the First Prize for animation. Admittedly there are not many films in the running: Servais remembers that Ray Goossens and some other ‘professionals’ were in competition, but the jury’s argument, giving priority to the originality of his graphic style, made him happier than the prize itself.

With the nice amount of money won in Antwerp, Servais can think bigger. He makes a choice that will not remain without consequences: he who was once so eager on getting that Paillard Bolex from the Ostend shop, has now decided to make his next film on 35 mm, the cinema format! It may sound funny nowadays, but it certainly took a lot of guts – or ignorance maybe – for a little provincial teacher, self-taught weekend animation filmmaker, born in a country where film making was a rare trade and from which all ‘majors’ ran off to Paris, to make such decision. Servais contacts a Brussels based cinematographer, Jean Rens, who sells him a 1928 Debrie, which his friend Seynaeve will adapt for frame by frame cinematography.