FROM THE CIGAR-BOX TO THE PAILLARD BOLEX 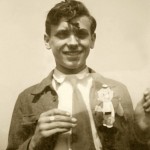 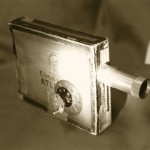 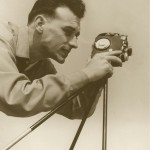 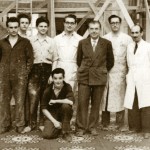 Servais enters the Academy of Fine Arts in Ghent – decorative arts section. For the first time he experiences a school environment in which he feels comfortable, especially thanks to the presence of Albert Vermeiren, a young teacher who is not much older than he is. “I told him about my project: an animated film. My decision was made”. Although he is not very familiar with the techniques of animation, he begins a studio with six of his fellow students, rents a greenhouse – a very cheap one – writes a script and has his mates do the in-betweening. To pay for the rent, he tries to save some money from his parents’ instalments, while they work their fingers to the bone to pay for his study – this is still a time of rationing.

He tries to deduce what he considers to be the necessary stages of an animation film. The drawings pile up, but one essential piece of equipment is still missing: a camera.

Confronted with such determination and seeing the young man sink into poverty to the extent that he no longer has anything to eat, his teacher offers him accomodations and proposes to knock together a camera! A while later, the work is done: with a cigar-box. That is how “Spokenhistorie” (“Ghost Story”) is made. He is badly disappointed with the image quality, but the animation virus has lodged itself and will continue to spread its infection.

At the decorative arts section, it looks as if Raoul Servais bursts out: posters, sketches for wall paintings, stained glass, designs for tapestry – he does it all. Upon graduating, he meets Maurice Boel, an encounter that will deeply affect him. Boel was an Ostend painter who had moved from expressionism into abstract painting. Marc Eemans would later characterise Boel’s work as “savagely painted as if in a state of trance, or dictated by the powerful rhythms of a tumultuous North Sea”. This may sound odd for someone of Servais’ temperament, but the influence is of an entirely different nature. Together, they give a new start to the “Ciné-Club d’Ostende”, a true institution founded before the war by documentary filmmaker Henri Storck and surrealist painter Felix Labisse. Dedicated to the arts, Boel initiates Servais in quality cinema.

He performs his military duties in Ghent and uses the occasion to visit Albert Vermeiren one afternoon every week. With his former teacher, he tries puppet animation but to no effect. Still, it is a fact: private Servais uses the little liberty the military service allows him to do animation, which clearly continues to haunt him. Once demobilised he decides, without telling his parents, to try his luck in Great Britain where the Rank Studios have acquired a decent reputation in animation. Badly informed, however, he arrives too late: the studio has just closed down. After various small time jobs such as dishwasher, docker, warehouse clerk and even auxiliary soldier in the British Army, Servais returns home, penniless: “I knew nothing about animation. I wanted to know more but the studios cautiously watched over what it considered to be trade secrets”. Servais is, however, not easily discouraged. Pretending to write an article, he goes to Paris, to the Gémeaux Studio (founded by Paul Grimault, who had already left following a dispute over “La Bergère et le Ramoneur”). He returns deeply disappointed: “The animators themselves do not have access to the camera department. There was a strict separation between the departments, in order to prevent anyone from getting an overall notion of a production!”

Trying to reshape his dream, Servais launches himself in amateur cinema, live action shooting, remembering his father’s amateur filming. By 1952, he shoots an 8 mm documentary about his friend Maurice Boel. Next he tries an experimental film: “Parallèles”, a silent film about the similarities between the parallel lines he sees around him, such as telegraph wires and railways. With “De Zandloper” (The Sand Glass) he films people who in Ostend much like anywhere else along the North Sea shores, stroll on the beach, nose to the ground, in search of objects.

There is no sound in these films – apart from the Boel documentary. For the latter, Servais records his own voice on disk, giving the film only an approximately synchronous sound.

From the experience gathered in these films, Servais keeps on dreaming of real film making. For him, passing from an amateur into something more professional is primarily stepping from one format to another: from 8 to 16 mm. The camera remains the magical object he watches time and again in the show window of an Ostend shop: a Paillard Bolex, costing 25.000 Belgian Francs. As newlywed, he decides to economise to be able to get hold of this object of his desire: “The day I had saved enough money, I went in … what a sensation!” Servais, however, immediately adds: “I had the camera all right, but no animation stand!”

The cinema which fascinates Servais so much does not really reach out for him. Fortunately other preoccupations distract him from his animation fantasies. In 1953 he works during several weeks with a man who was at that point not yet the “monstre sacré” of 20th century painting, but who has already acquired some international renown. René Magritte (1898-1967) is commissioned by Gustave Nellens, proprietor of the Knokke Casino to make panoramic frescos in the “Salle du Lustre”. This “Salle du Lustre” is famous for its monumental lustre, one of the largest in Europe. Under the supervision of Raymond Art, chief decorator of a casino that supports the arts (Nellens is a collector of paintings) and with two other decorators and as many assistants, Servais is commissioned in June 1953 to transfer the eight oil paintings made by “le maître” one month before, which repeat some of the themes Magritte had developed since 1926, to the walls of the circular hall. It is the “Domaine Enchanté”, subtitled “Panorama Surréaliste”. Magritte, always dressed in a three-piece suit, holds himself in high esteem. He has his assistants call him “maître”, much to Servais’ astonishment. As youngest member of the team, Servais manages to overcome his shyness and dares to make some suggestions of a technical nature and regarding colour to Magritte. The “maître” takes it very badly and Servais is sent away for having neglected a refusal from Magritte. He will be reintegrated by order of Nellens. This rather troubled relation between the master of Belgian surrealism and a young wall painter who knows what he wants has never prevented the latter from being profoundly influenced by Magritte’s universe. He claims to have been fascinated at the time by a reproduction of the “Modèle Rouge”, a canvas depicting two “feet” which are also shoes, placed in front of a palisade. Throughout Magritte’s work he discovers surrealism and its ambiguity, for which he will develop a constant admiration, even though his own sensibility will always oscillate between magic realism and expressionism.

Married and father of two children, Servais seeks to earn a more regular living. He gets commissions thanks to his political commitment: first for the Young Socialists, then for the Labour Party. He draws a “History of the Belgian Workers Party” (predecessor of the Belgian Labour Party), for the “Vooruit” newspaper in Ghent and for “Le Peuple” (Flemish and French speaking dailies of the labour movement) as well as for “Germinal” (French speaking weekly of the ‘Parti Socialiste Belge’). He mainly draws illustrations, ‘cartoons’, narrative comic pieces which we hesitate to call ‘comic strips’. Servais would resolutely move away from these:“I was not particularly interested in comic strips”.