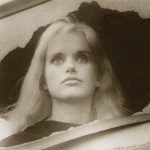 Having launched himself apparently in the world of animation, Servais nevertheless always never gave up to do live action shooting. Made during the making of “Harbour Lights” and “The False Note”, “November Diversion”, finished November 1962, is, as he puts it, a weekend film, made with Jean Decock and a couple of friends in a car cemetery. The lead player, Werner Edebau, was only available during the weekend. Shooting takes place when the weather allows it. “November Diversion” reveals some of Servais’ preoccupations, in a less refined form as this film is made in live action, without any trickery. “It was fun, because we could see the result of our work much faster.” In a dreamlike manner the film depicts the pilgrimage of a man in the car cemetery where he has left his car. He meets a beautiful young blonde at the wheel of a sports car, but she turns out to be a mirage and she changes into a grim mask.

The entire film looks like an initiation in which the main character goes under in a kind of desolation, parable of ageing, and that ends with the apparition of a young girl (played by Joelle, Servais’ own daughter), at the wheel of a pedal car: the cycle of life is never far off in somewhat naive existential meditations like this one. Apart from the obvious symbolism that reminds of student films (the license number of the car is STYX 758!) and the concessions to a certain trendy modernism (the rapid succession of shots, the continuous use of reflected images and the slightly ‘free’ jazz music), the film displays a talent for sober and effective narrative, making the film enjoyable, in spite of its wild oats. Certain images announce characteristics that Servais develops so successfully in his first animation films, in which the entire focus is on one single character, which in its futility is confronted with a world that is plagued by question marks.

During the same period Servais also makes “The Season of the Sirens”, a live action 16 mm black and white film which was never finished and of which all material is, unfortunately, lost. Its theme announces “Sirène”, but also, and perhaps especially, “Operation X-70”. The film’s basic theme once more reflects a patient yet obstinate Servais, who keeps several projects going, sometimes during long periods, before they are actually executed.